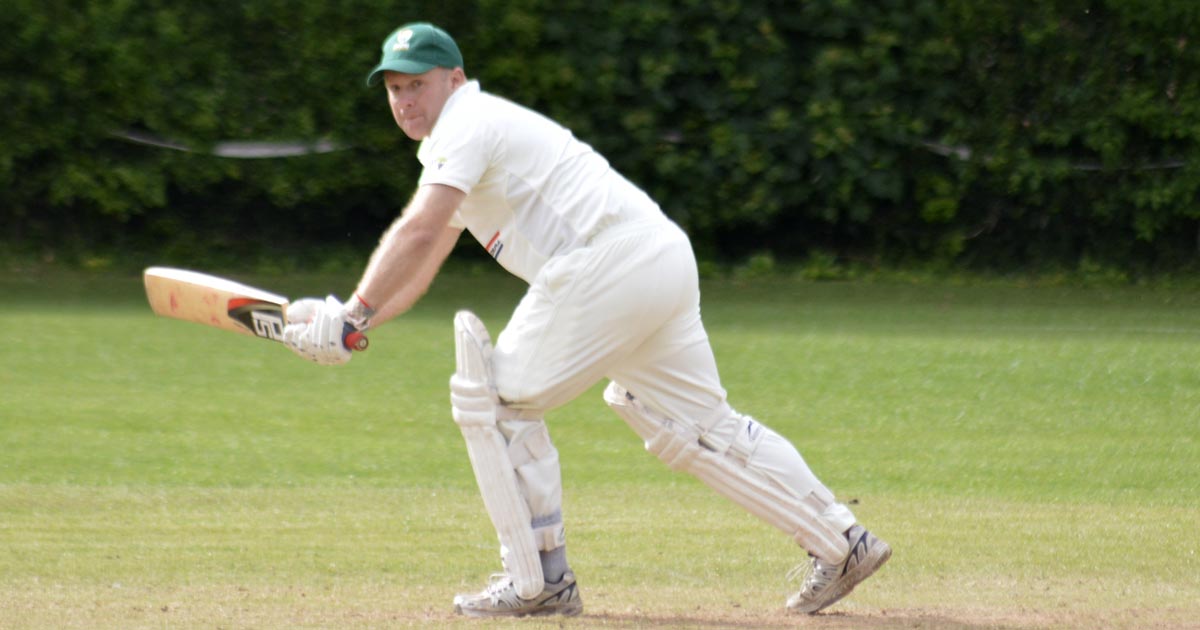 There’s more than one way to win a game of cricket as was proven in week 9 as the two victorious Jets sides won by margins of 112 runs and 3 runs respectively! The 4thXI now sit atop Sunday Division 1 whilst all senior sides are well positioned for positive finishes.

Oakmere arrived at London Road with the enviable record of having completed all of their fixtures in 2021. There seemed no chance of that coming under serious threat on a sweltering Saturday but the game did endure a bizarre delayed start with the sports club alarm tripping. With ears still ringing, a frantic opening stage saw runs flow for the Jets but they did lose skipper Jake Reynolds to a top-edged pull as the game then settled into a more sedate pace.

The innings was set up as Andrew Clarke combined with Saul Gould (27) and Dave Oldfield (33) for stands of 54 and 60 respectively, helping to blunt the visiting seam attack. With Purcell bowled out for a miserly 0-28 the Jets then did as they have done for much of the season. Taking advantage of wickets in hand, steadily expanding strokeplay posted a score in advance of 200 despite the loss of set batsman Clarke for 62 (9x4, 1x6, 85b). Seven maximums helped push the score along to 208-8, visiting captain Phelan taking 4-55 at the death.

The 1stXI then immediately set about making the new-ball inroads that had eluded Oakmere. Aggressive fields leaked runs but the wickets arrived early and often with Jamie Henderson clean bowling three of the top order, leaving the innings in tatters at 39-5. The only downside for the Jets came when Matt Wragg (1-4) exited injured in the middle of a promising spell but the ten men finished the job ruthlessly. Wickets for all three spinners left Jamie Henderson (4-13) to return at the tail and he needed just a single ball to again rattle the stumps and finish the innings, a deserved 112-run margin of victory in a dominant display.

The 2ndXI failed to capitalise on last week’s win as a much-changed eleven fell to a disappointing defeat, leaving them up against it in the promotion race and no margin for error in their remaining fixtures. Fellow challengers Knutsford proved too strong, taking advantage of Jets stuck in traffic with a rapid start to their innings. With a full complement of players some normality resumed but the hosts again countered, recovering from 94-7 to post an unlikely 170 all out.

It meant a challenging chase for a side missing its usual top order and the opening bowling proved to be the most impressive seen by the 2ndXI this year. Three early wickets fell to Atal Jan (3-21) as the platform for a successful chase never materialised. The Jets struck just four boundaries across the innings as the hosts protected their runs on the board expertly despite the best efforts of Manusha Wettasinghe (29), Ed Parkinson (22) and Matt Mullany (19), the twos crawling to 129-9 to at least pocket 14pts.

Similarly, the threes failed to follow up a positive result as, not for the first time this season, they largely contrived to beat themselves. Nine drops in the second innings, including three in a single Andy Hadfield over, allowed Congleton to secure a 2-wicket win and keep the Jets lodged in midtable. It wasted an entertaining innings from Chris Taylor who smote eight boundaries in a 37* that rescued the 3rdXI from a perilous 98-8 as he and Nathan Warner added an unbroken 55 to help post 153-8.

That should have been more than enough to defend but that proved impossible with so many opposition batsmen given second and third lives. Amongst those guilty of drops, Adam Burgess (3-29) atoned with a couple of grabs and a run out as the game was still on with Congleton 102-7. An eighth wicket stand of 40 proved decisive though to leave Andy Welsby’s boys top of the bottom half.

Jets fans were glued to the live score updates on Sunday as the 4thXI went top of Division 1 with a nail-biting win over Ashley. It looked like the home side would make the fours pay dearly for failing to bat their allocation, posting just 142 and leaving more than five overs unused as six batsmen failed to convert their starts into a match-defining knock. However, the bowlers did the business and held their nerve at the death to eke out a 3 run victory.

Scott Parkinson (4-40) made early inroads but the innings of the day from Ashley’s Mohammed Kamran (50) looked to be steering the hosts home. A smothering spell of spin from Saturday wicket-keeper Matt Mullany kept the score in check though and when Sam Turnbull returned to dismiss the set batsman all bets were off. All three results remained possible heading into the final deliveries but wicketkeeper Dave Bridge executed a catch and a stumping, the latter from Adam Burgess whose 40th-over wicket-maiden won the game.