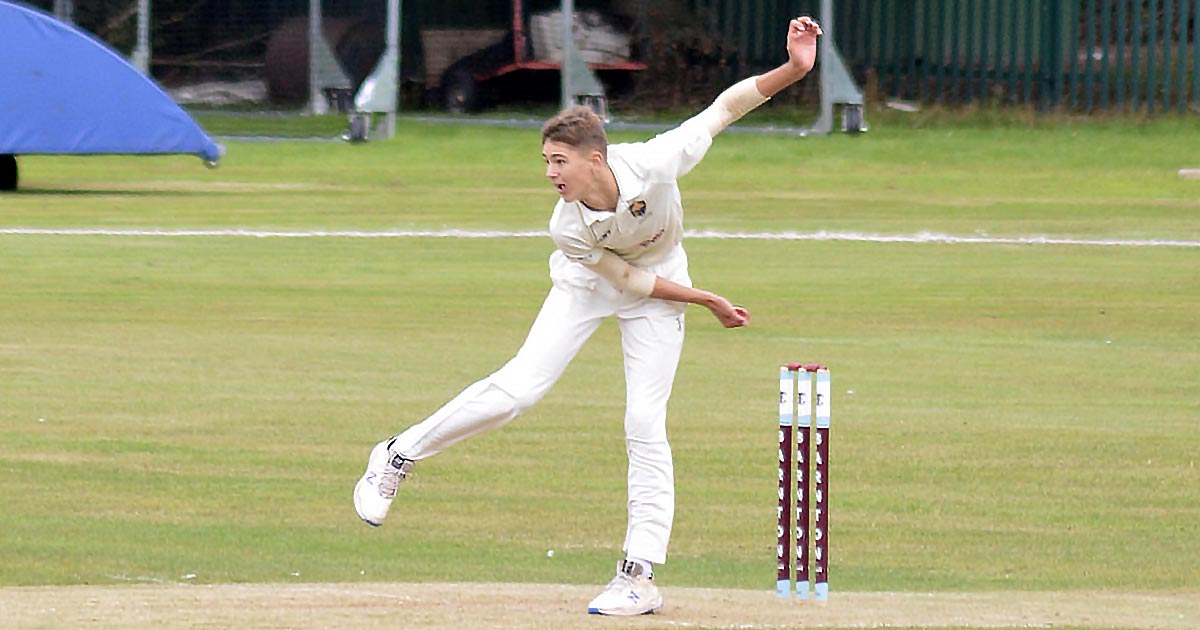 If Carlsberg did weekends… Sun out, cricket back, and four wins from four as North East Cheshire returned with a bang for 2022. Whatever the season may hold for the Jets from here this was one weekend to savour across the board.

A first fixture in the newly-formed CCCL Division 3 saw Kingsley travel to London Road. The Jets had edged two close encounters with the Crofters in 2021 so this would be a good test for a home side looking to quickly adapt to the new 100-over format. Both teams also welcomed overseas players for the first time since the pandemic, and the visitors’ Queensland quick was immediately into action after they won the toss.

It was a fire and ice combination with the new ball but the Jets gave as good as they got against the opening pace of Australian Thomas Eyley (3-41) and accuracy of Loye (1-43). The foundation for a big score was in place but the experienced pair of Reynolds (45) and Clarke (37) couldn’t cash in on their starts as Kingsley cut off the boundaries and starved Manning Berry of the strike. The Jets overseas had announced his arrival by sending his first two deliveries skimming to the rope, but he was to fall two runs shy of a debut fifty in the latter stages as the home side settled for a par score at 200-9 without any closing fireworks.

Despite struggling with the new Dukes ball in a strong cross-breeze, two early strikes from Jamie Henderson (3-19) got the Jets up and running as they controlled affairs until drinks. Spinners Westerby and Oldfield (1-22) then engineered a collapse to 77-6 but, to their credit, the visitors kept coming with some positive strokeplay. Two maximums from Mullins (50) were matched and bettered by Eyley who enjoyed taking on his compatriot Berry with three of his own. The odds were always in the 1stXI’s favour though and it was youngster Will Westerby (5-26) who returned to take the final wickets for a maiden five-for in senior cricket, Kingsey 167 all out.

Vice captain Fran Turnbull led the second string to a comfortable opening-day victory as they made the short trip to Ladybridge. Chester Bowden couldn’t repeat his centurion heroics of the 2021 fixture but a solid team effort totalled 190-8 in 40 overs as seven batters reached double figures. Matt Mullany (46) and Sam Scragg (45) were the pick before disappointingly both falling shy of opening their seasons with a half-century.

An opening burst of 3-12 from Matt Wragg removed any semblance of a contest in the second innings as the hosts slumped to 19-4. From similar positions the Jets spin attack have thrived but here the hosts’ middle order took a liking to both Jimmy Williams (1-39) and Adam Burgess (2-41) in their ten-over allocations. Cameos from Ruff (33) and Sarbutts (33) helped Ladybridge into three figures but little further, Sam Turnbull (3-24) mopping up the lower order for a 62-run margin of victory.

The pick of the team and individual displays for the weekend came at Cheadle Hulme where Andy Welsby’s 3rdXI delivered a crushing 9-wicket win to go top of the table. A six-man attack containing four teenagers all found success, led by the opening pair of Max Collins (3-12) and Toby Street (2-27) who ran through the top order - the latter also adding a run out for good measure. A wicket on senior debut for Sam Westerby (1-14) helped dismiss Cheadle Hulme inside 32 overs, all out for 123 which was given short shrift in reply.

Rory Caine, another of the Jets’ teenagers, dominated stands of 59 and 67* to become the first player to pass fifty in 2022. He carried his bat for a superb 61* (8x4, 2x6, 66b) as John Westerby (21) and Alex Dickman (25*) played valuable supporting roles to get the threes off to a perfect start. Cheadle Hulme juggled the pack with no less than eight bowlers having a crack at the batters but only Khan (1-22) found any success with the Jets in ruthless mood.

A perfect full house for opening weekend was secured on Sunday as the 4thXI followed up their Saturday counterparts to start their Twenty20 group with a bang. Lindow elected to bat and took 11 from the opening over but the Jets slowly wrestled back control with a strong display. A spectacular one-handed catch from Harrison Waddington got things going, one of three dismissals for the keeper, and the 4thXI continued from there as the seven bowlers helped limit Lindow to just 100-8.

A father son Bowden opening pair added just 15 for the first wicket but a stand of 72 between Chester (55*) and Harrison Waddington (28) was the game’s defining contribution. The pair shared three sixes, two coming in the ninth over which was pillaged for 20 runs to help accelerate towards a positive conclusion. Some tighter bowling did take things into the latter stages of the innings but it was a positive start to the group stage ahead of make or break encounters against the Premier League sides Alderley Edge and Hyde.