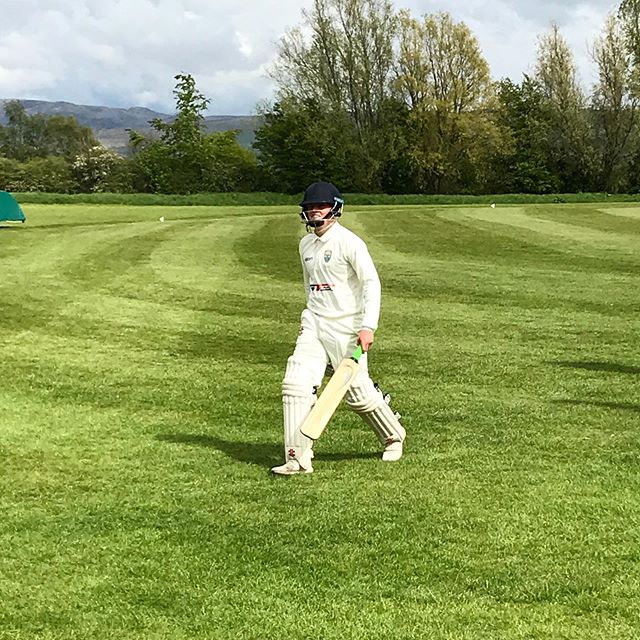 Forecasts improved to see all fixtures completed over the first May Bank Holiday marked by clear skies but bitterly cold conditions. Only the 1stXI’s tight loss prevented a full house of wins as the 3rd and 4thXIs registered their first wins and the 2ndXI showcased their title credentials in jumping to the top of their division.

A long trip to Haslington saw a match go right down to the wire for the 1stXI in a low-scoring encounter between two evenly-matched sides. North East will reflect on a collapse from 71-3 to 80-9 as they key period as both set batsmen, Andrew Clarke (26) and Charlie Dahlenburg (20), departed.

A positive response wrestled back some initiative, firstly with a quality last-wicket stand of 41 between Toby Carson and Lewis Wood and then four early wickets after tea, all to Danny Williams (4-30) and including one from the first ball of the reply.

It was tough cricket in attritional conditions as the match slowly ebbed towards a tight finish, runs for Istead (59) matching wickets for Jamie Henderson (3-29) to leave the match in the balance. Sadly it wasn’t to be though as the final pair eked out the winning runs against a tremendous bowling effort.

After an aborted attempt in week one, the 2ndXI season got underway with a routine win over visiting Haslington to kickstart their promotion campaign. Surprisingly electing to bat first, the visitors never got going and the loss of the experienced Unsworth, caught at slip against the metronomic Simon Hare (4-8), saw their innings quickly subside.

Teenagers Warner (2-13) and Wettasinghe (2-12) assisted as the Squirrels were bundled out for 49, a total knocked off with minimal fuss after the interval. Openers Mirza and Wragg both fell trying to push the pace, but James Banner put a higher price on his wicket and saw his team home with a composed unbeaten 29*.

The 3rdXI marked their first home game in Disley with a win over neighbours Langley, chasing down the visitors 155-8 in the final over of a close encounter. Uni boys Penn (3-26) and Benson (2-18) starred with the ball after some excellent top-order batting from Langley, led by Rick Laughton’s 51.

After tea the Jets were indebted to an enterprising innings from youngster Sam Potter who registered a maiden Saturday cricket half-century. His even 50 contained four 4s and three mighty 6s as six other batsmen chipped in with useful double-figure scores to help bring home the bacon.

After a chastening defeat to kick-off their Twenty20 group campaign, the 4thXI bounced back with two resounding victories in their cup double-header to finish second in the group.

Both games followed a familiar pattern as the Jets batted first and saw openers carry their bat for half-centuries. First, Chester Bowden struck 65* against Woodford to help post 166-3, Saul Gould then repeated the trick the following day against Stockport with 51* out of 156-5.

Seven bowlers shared the wickets in keeping Woodford to 110-9 and there was a more incisive showing on Monday as Stockport were sent back for just 29. Unsurprisingly this included some impressive bowling figures, led by Mikey Gilmour’s outstanding spell of 4-2.