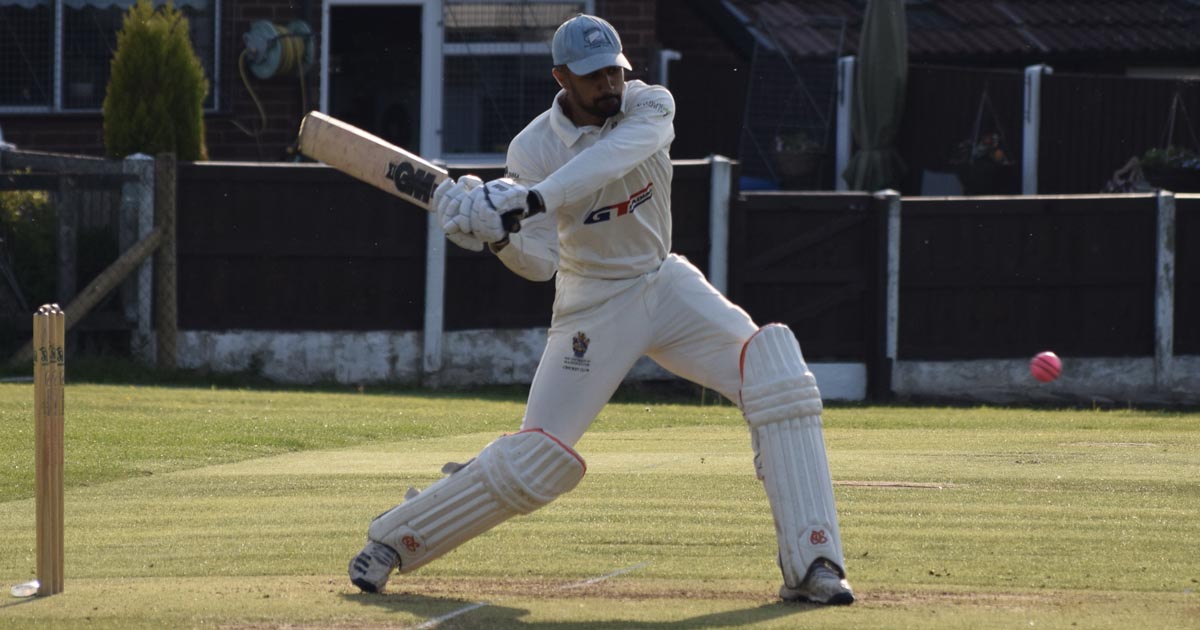 A bumper Bank Holiday weekend saw the senior sides back up their week one displays with another round of victories and some emphatic performances. It means the three Saturday sides all sit top of their respective embryonic league tables, whilst the 4thXI qualify as winners of their Twenty20 group.

The 1stXI returned down the M56 with 25 points from a professional display away at Runcorn. Spin was again to the fore in dry April conditions as a second five wicket haul in as many weeks for young Will Westerby (6-37) caused another opposition collapse. After some tight opening bowling from the seamers, the introduction of Westerby and Dave Oldfield (2-29) paid immediate dividends with the former striking second ball as left-hander Beech (37) overbalanced to be stumped.

A whirlwind 30 from the dangerous DJ McNamara did put some pressure back on the bowlers, but when he fell to a fine catch in the deep it sparked the loss of seven wickets for 42 runs to set up a simple chase of 140 to win. The hosts experimented with some new-ball spin but it was a switch back to seam that did see some success with Beech (2-29) snaffling both openers to almost identical dismissals as Reynolds and Gould drove loosely into the off side.

That was as good as it got for Runcorn though as Andrew Clarke and Manning Berry compiled a chanceless partnership of 91 to seal the game. Clarke went on to raise the first ones fifty of the summer in the process, carrying his bat for 65* (9x4, 1x6, 76b), whilst the Jets’ Australian import added to his week-one knock with another unflustered effort. He finished unbeaten on 32* and struck the winning runs to complete a fine day’s work for the 1stXI.

A much-changed 2ndXI welcomed back skipper Alex Dyson as they made their home bow against Brooklands. Invited to bat, Rory Caine backed up his promotion to the side with a second half century of the season, finding the boundary eleven times before being bowled for a fine 58. Top order runs continued to flow as Sam Scragg also passed fifty but he struggled for support, eventually the seventh man out for 66 as the rest of the recognised batsmen fell for single figures to prevent posting a 200+ score.

As it turned out the Jets’ 183-8 was more than enough though, the 2ndXI spinners also having a field day to dismiss Brooklands for just 77. Slow left-armers Adam Burgess (4-14) and Jimmy Williams (3-15) shared seven of the wickets to fall, whilst there was a lone scalp for offie Ed Parkinson (1-9).

Shez Mirza lit up Jackson’s Edge with the first Jets century of the summer as his sparkling 118* (10x4, 8x6, 98b) backed up the 3rdXI’s decision to bat first on their way to an imposing 219-3 against visitors Warrington. Mirza was in an unforgiving mood, smashing the ball to all corners in adding 91 with Chris Espley (31) for the second wicket as well as an unbroken 89 with opener Alex Dickman (42*) who thankfully returned to the crease after retiring earlier in the innings.

The bowling attack took wickets at regular intervals in response, never allowing the Warrington innings to gain any positive momentum. Only two visiting batters made it into double figures as the wickets were shared around a seven-man attack led by Toby Street and Elliot Ashton-Bryant whose new ball bowling immediately had the opposition under pressure from which they never recovered.

The first of a double header for the 4thXI went the Jets way at Alderley Edge where Damien Mullany’s men successfully defended 132-4 on a featherbed wicket. Despite the early loss of Matt Wragg, out without troubling the scorers, the top order accumulated runs steadily but without any Twenty20 fireworks. Southpaw Dan Mullany topped the individual efforts with an unbeaten 40*, well supported by Rob Bowden’s 33 before he was one of two victims for Stan Price (2-21).

Sticking with the theme of the weekend it was two tight spells from Jets spinners that heaped pressure on the home side. Owen Johnson and Ed Parkinson conceded just 39 runs across their eight shared overs meaning the seamers just had to hold their nerve in the final stages. They did just that as Dan Mullany (3-13) completed a man of the match display by bowling set man Rao for 52 to help hold Alderley ten runs shy of the 4thXI’s first innings total to set up a group decider against Hyde on Bank Holiday Monday.

The group decider went right down the penultimate ball as the Jets topped the group with a brilliant win in front of the assembled crowd at London Road. An undermanned bowling lineup performed brilliantly until a late flurry of 47 runs in the final three overs suddenly swelled the score to 147-3 and a potentially tricky run chase. Lewis Barham top-scored for Hyde with 49 before being bowled by Ed Parkinson but it was the hitting of Grindlay and Douse in the latter stages that swung the momentum.

That carried over into the second innings as some good bowling from Derbyshire youngster Zak Kelly had the Jets reeling as the required rate spiralled towards double figures. Only some brutal striking from Matt Wragg kept the contest alive as he found good support in Rob Bowden and then Matt Mullany. Wragg went to fifty but was run out for 55 attempting to farm the strike to leave a nervy final few overs. A final over boundary from Seamus Walsh helped settle the nerves though, and a win was confirmed by the skipper from the penultimate ball for a 3-wicket margin of victory and a place in the knockouts