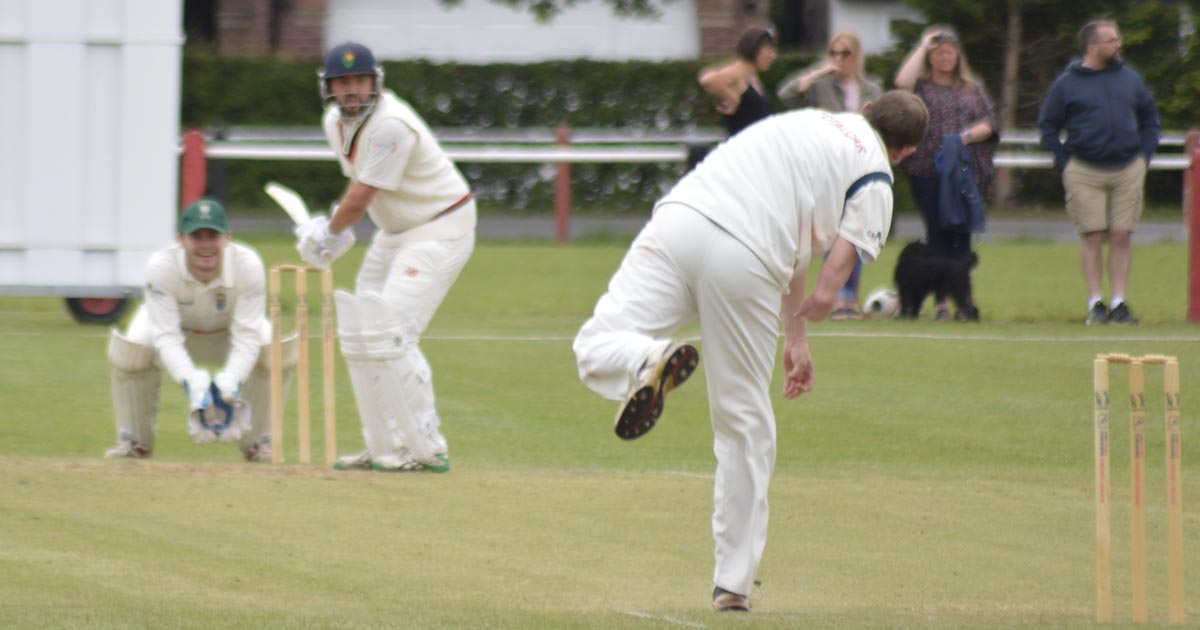 The halfway stage of the 2021 season was marked with wins for all three Saturday sides on a sunny June weekend. Runs on the board was the order of the day as all three teams posted totals in excess of maximum batting points before taking the field to successfully defend them.

25pts and a 108-run margin of victory was the perfect tonic for the 1stXI after their non-performance at Ashley the previous week. An understrength Barnton were the visitors to London Road to face a home side who also had to shuffle their pack with a few key performers absent. Victory was built upon a much improved batting display, though the Jets may have feared the worst when they lost a wicket in the first over having elected to bat.

Jake Reynolds struck a third fifty of the campaign, his 62 (10x4, 0x6, 74b) mixing respect for the good balls whilst ruthlessly cashing in on anything loose. He formed stands of 46 with Saul Gould and 67 with John Westerby to set up the innings, but when big-hitters Sam Waller and Will Ritchie fell in quick succession there was still work to be done. Enter James Banner (22*) and Dave Bridge (22*) who showcased a different skillset, scampering between the wickets intelligently to calmly swell the score to 196-6 with an unbroken 50-run partnership.

Despite 12 runs from the opening over of the reply, fiery new-ball bowling from Andy Heath (2-19) and Jamie Henderson (4-22) quickly had Barnton in trouble at 15-3. The visitors dug in to deny Henderson his five-for but he delivered the key wicket of Australian Corey Devanny amongst his four top order scalps. It allowed the teenage spinners to bowl without pressure, Waller and Westerby sharing 15 overs for just 31 runs, and James Banner (2-4) to mop up the tail to finish the opening half of the season with a sixth league win.

In a quirk of the fixture list the 2ndXI travelled to Timperley for the reverse of the previous week’s fixture. Like his 1stXI counterpart, Alex Dyson led from the front with a half-century from the top of the order with a quickfire 64 (9x4, 1x6, 54b). Harrison Waddington added an equally brisk 57 (5x4, 4x6, 48b) as the top order cashed in unlike the previous week, Sam Scragg and Fran Turnbull also chipping in with useful 30s to help post a defendable 230-7.

The story of the reply was an incredible spell of bowling from veteran Jimmy Williams, collecting an amazing nine maidens in his 3-8. It allowed the Jets to take total control of proceedings to the point where there was no concern even with Timperley’s Gary Fisher compiling 69. The hosts did survive their innings, finishing 158-8, but never threatened to deny the second string their 25pts as they continue to hope the sides above them drop points in the promotion race.

A clean sweep of Saturday results was confirmed as the 3rdXI also successfully defended their first-innings total of 173-7. As with much of the season, it was the lower order who provided the impetus after opener Alex Dickman was unfortunately run out backing up for 37. John Johnson smashed 61* from seven in the order to help fire the Jets from 93-6 and 122-7 all the way to maximum batting points and beyond.

Those runs were needed as the Rostherne openers set off like a train in adding 75 for the opening wicket. In recent weeks the 3rdXI have struggled to dislodge the opposition's key men but Alex Oswell did the job here and, after the loss of Teubler for 54, the hosts never recovered. Adam Burgess (4-22) and the previously incapacitated Chris Taylor (2-8) did the business to keep the score down to 147-9 and secure a welcome win for the threes.

The 4thXI meekly surrendered top spot in Sunday Division 1 as hosts Brooklands delivered a real thrashing to the Jets. The batting never got going and slumped to just 88 all out as U15s Rory Caine and Ed Parkinson both top-scored with 18 apiece. With no platform set and no partnerships of note there was no chance of setting a competitive target and the one-sided nature of the fixture continued in the second innings.

Brooklands knocked the runs off inside 12 overs, carrying over their dominance from the first innings. A solitary wicket for Sam Thompson was as good as it got as the hosts raced out of the blocks to 89-1, taking top spot in the process and looking by far the strongest side in the division on evidence to date.