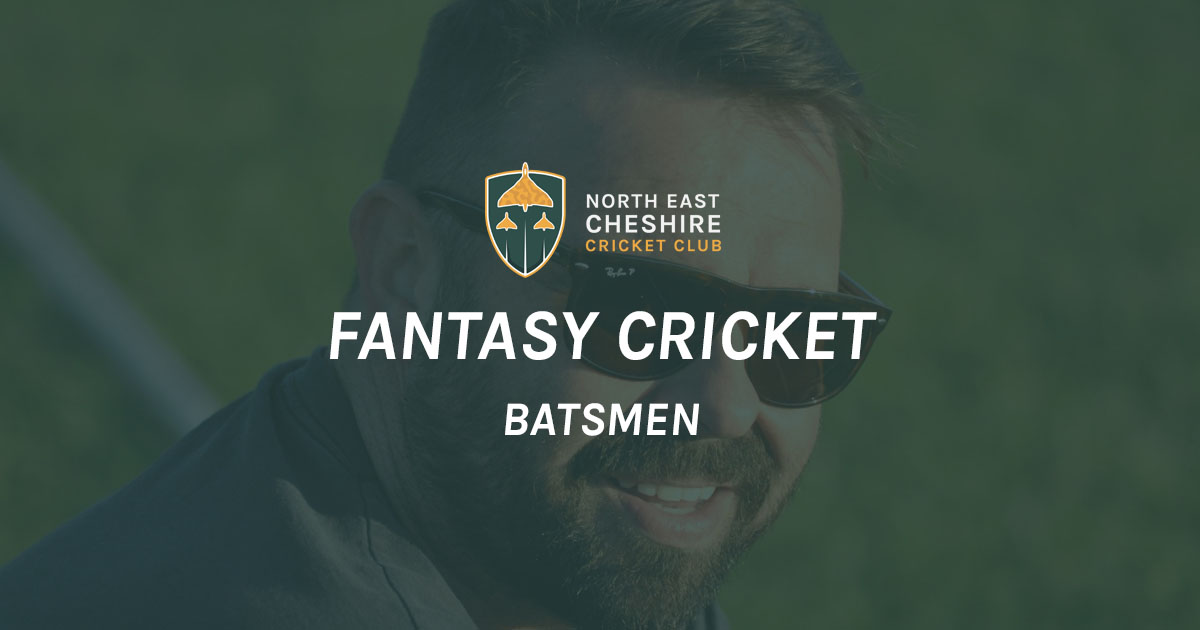 Hopefully you've had a spin through the rules article to get aquainted to the new points structure, and now you are pumped and ready to run the rule over the willow wielding batsmen who will be taking you to the top of the fantasy mountain and raising your bat aloft.

If you haven't already - sign up and create your team here!

£9m - Charlie Dahlenburg: The Jets first import, the high price point which comes with being the overseas has been worth the outlay in previous seasons and Charlie will be looking to continue this run. You can find a little background info on Charlie here, and even read an interview with the man himself to see if he's the man for you.

£7.5m - Jake Reynolds: The 1st team captain has a high price on his head. With an average of over 30 in 20+ games for the past 2 seasons, plus with fielding stats to rival that of a wicket keeper, he can get some major points for your team.

£6.5m - Stewart Reynolds: An opening batter looking to take advantage of the new Jets setup, hoping to get a good run without a call up to the firsts to interrupt his form. Still maintained a high points average last season, as he rarely fails to score with the bat.

£6m - Saul Gould: This seems an absolute steal, the opening batsmen hit 674 runs last season and was one of six players to have hit a century last season. The youngster is consistent with the bat too, registering a score in all but 2 of his 32 innings.

£6m - Harrison Waddington: Saul's opening partner in crime saw his all or nothing batting get him scores of 151* and 101*. He also had stints behind the stumps, which helped boost his total season points to 728.

£6m - James Banner: Scored highly in the fantasy league last season, which bumped his price up. This is partly due to his stellar fielding record of 18 victims without featuring in the slips cordon.

£6m - Andrew Clarke: A lean year meant his price has been reduced but the veteran shouldn’t be written off. He was still one of the leading run scorers last season and another player looking to retain his position in the slip cordon.

£6m - Matt Wragg: Had his best return with the bat and ball last year, his new found status as the opening batsmen in the shorter form of the game has led him to focus in on batting and look to build on this in the longer format.

£5m - Manusha Wettasinghe: Has migrated to the batsmen category, after seeing his bowling reduced to a few cameo overs. The youngster can hold his own for the 1st and was formidable when playing further down the tree, so could prove to be a shrewd investment.

Click here for the rundown on all the rules.

Scout your All Rounders and Keepers here.